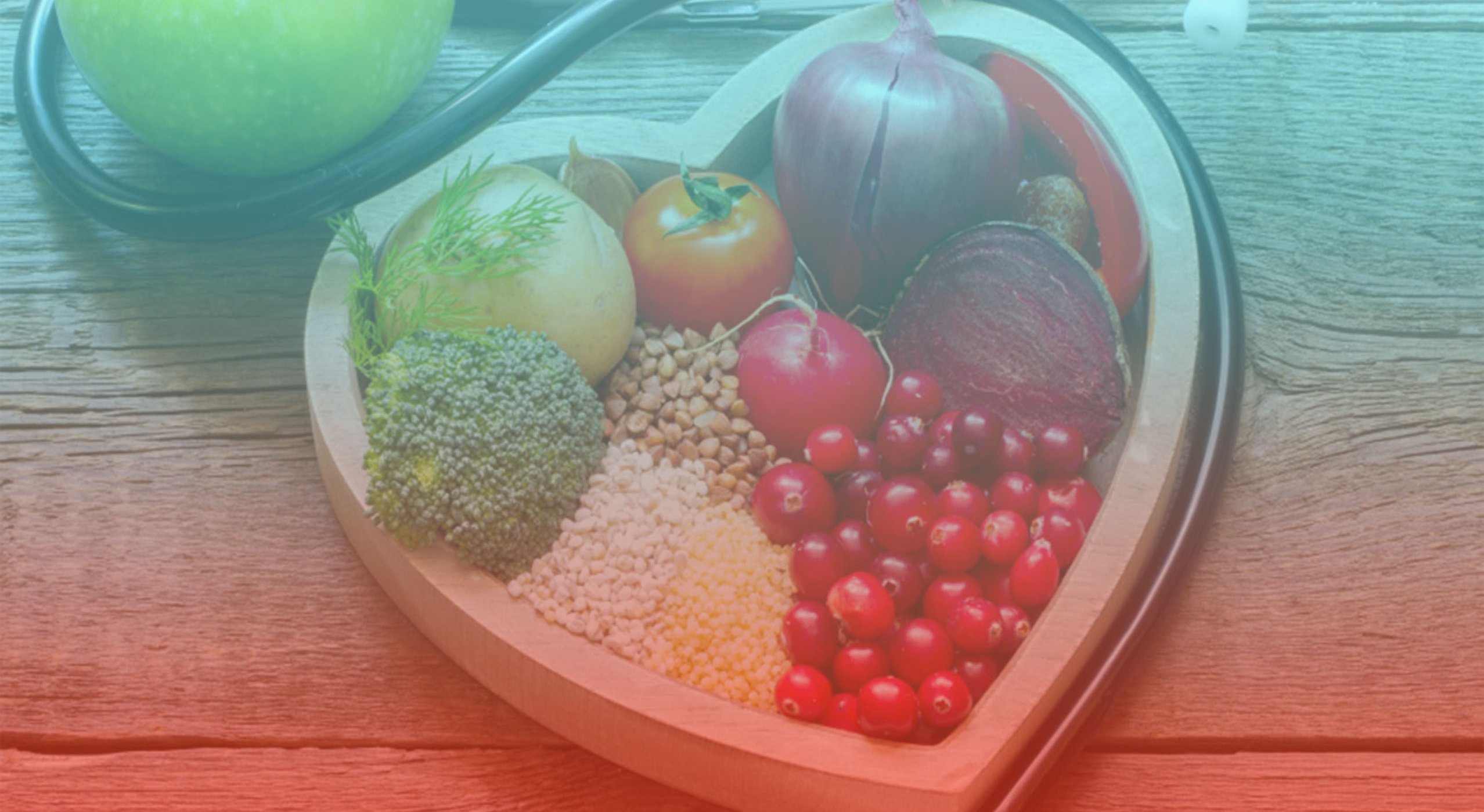 Technology
HEALTHCARE IN THE AGE OF EXPERIENCE PART 2 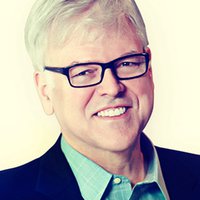 Technology and customer experience has paved the way for today’s consumer-driven healthcare marketplace with innovative offerings that hinge on convenience and customization.

In our last installment on innovation in the healthcare industry, we addressed the environment where consumer demand is driving changes in healthcare and the parallels between the Healthcare and the Financial industries. In today’s consumer-driven marketplace, technology has set the stage for innovative offerings that hinge on convenience and customization. According to an article in Quartz, three significant shifts are taking place in healthcare; Consumers are paying more of their healthcare costs and having more options for where they get their healthcare, which is, in turn, transforming expectations for a new generation of healthcare consumers. With choice and customization touching nearly every industry today, why should healthcare be any different?

Up until recently, healthcare has not been motivated to change, since consumers had limited options. Patient satisfaction was rarely addressed as a benchmark for healthcare delivery systems, since patients were driven to certain providers through their healthcare plans and a hospital or doctor’s office rarely saw themselves in competition with another provider for patient loyalty or dollars. As happened in the Financial industry, market innovators in healthcare have already begun responding to consumer demand. Soon we had pop-up clinics in pharmacies, primary and urgent care centers with extended hours on every corner, and specialist care clinics responding to the specific patient needs. Healthcare consumers today go where they can be seen quickly, by an empathetic caregiver, who will give them customized, personalized treatment options, with an eye to lifestyle and compliance. In short: the rise of the empowered healthcare consumer.

Since consumers are driving the shift in healthcare today, it’s important for providers to accurately assess the consumer attitudes and behaviors that lead to transformative healthcare experiences. In a Deloitte Center for Health Solutions study, six types of archetypes were charted along how active or passive consumers are in accessing their care. 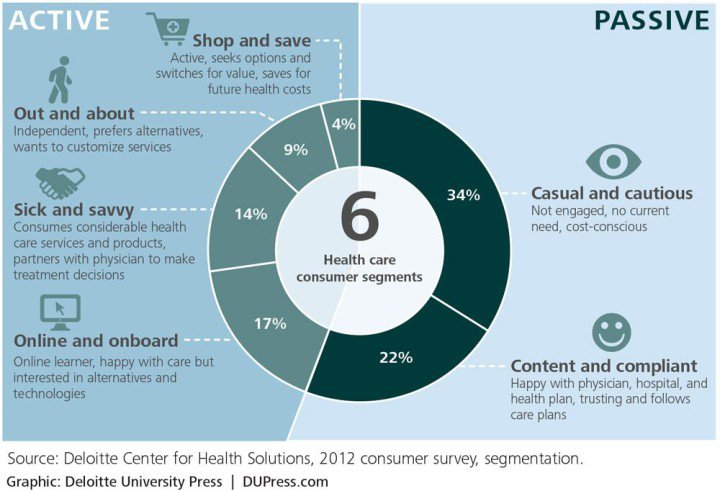 This study found 44% of consumers in the active category – the budget conscious, the alternative service seekers, the collaborator, and the googler who wants the latest technologies. Further, the study found 56% as passive consumers – with 34% not currently engaged but still cost-conscious for the future and the other 22% content with their physician and plan. While less than half are currently categorized as active consumers, it’s the 34% who are passive and not currently engaged but cost-conscious, that can easily tip the scales into the active category. This passive consumer is the face of the healthcare future, and market innovator healthcare companies understand that catering only to the passive consumer amounts to arranging the deck chairs on the Titanic, its waiting for the consumer wave that could sink their enterprise.

What’s interesting about the modern healthcare environment is provider response to new consumer demands and competition. Generally speaking, healthcare institutions either rise to the challenge to create new, responsive consumer offerings or they close ranks, hoard data and employ bureaucratic rules for in-network care in order to maintain market share. For those providers in the closed ranks camp, they should realize that competition may come from the unlikeliest of places. Consider how the walk-in urgent care clinic has revolutionized the delivery of care and simultaneously taken patients away from their traditional doctor’s practice. Consumer demand actually set the stage for the rise of the doc-in-a-box concept, with pressing but not critical healthcare concerns. Let’s face it, when you have the flu, you don’t have the luxury of making an appointment several weeks in advance. Unless you’re gravely ill, sitting in an emergency room for hours waiting to be seen by an ER doctor is not something anyone would relish, much less someone suffering with the flu. The urgent care center fills that gap, and no one, except the consumer, saw it coming.

According to a Continuum article 5 Things that Healthcare Can Learn from Financial Services, “Today’s consumer lives in a fluid world, crossing channels and industries flexibly and bringing along experience models inherited from other categories. So our competitors now are not only those that are vying for our customer’s business, but those who are setting her expectations around great experience.” For many healthcare providers, legacy systems and approaches of “that’s the way we’ve always done it” do not translate well into the modern consumer healthcare environment, where the consumer calls more of the shots. In order to survive the consumer healthcare revolution, providers must shift mindsets and view the healthcare experience from the lens of the patient, rather than that of the provider. Further, healthcare institutions must understand that they are a brand to their patients and that the best way to drive brand loyalty is by innovating around great experiences and patient engagement.

As we discussed in part one of our healthcare series, the delivery of care grew out of a one-size-fits-all model, where most healthcare could be accessed at the local doctor’s office, then at one large hospital. Today’s environment is a patchwork of providers – from the local CVS clinic, urgent care provider, local hospital, and specialist care clinic. The diverse needs of even one patient open up vast opportunities for engaging with the individual patient as never before, but it’s incumbent upon providers to embrace this coming change. Just as in the dot-com era, today’s technology is pushing the limits of what healthcare engagement will look like in the future. As a provider, taking the time to understand the healthcare consumer and identify your unique value proposition inside the industry is key to ensuring your evolved healthcare brand is meeting the modern healthcare consumer’s needs, adding value to their lives and providing a customized experience through the healthcare process.

United Healthcare’s Advocate4Me and Kaiser Permanente’s Imagining Healthcare Anywhere allow us to see the convergence of people, data, technology, and care into a world where everything is connected – patient to doctor, doctor to technology, patient to technology and back again. In this world of experience, patient care is elevated to deliver more and mean more to the patient. Healthcare is no longer a series of single health incidents, but a holistic wellness experience driven by patient needs, the latest medical advances and innovative technology converging to give the individual the best care for their lives.

Similar to the banking industry before it, individuals don’t see healthcare as simply medicine, just as money isn’t just figures on a spreadsheet. Healthcare to consumers means that they can go live their lives fully, just as money allows banking consumers to fulfill their larger financial goals. In this world, healthcare isn’t the doctor, it’s wellness.

To further empower consumer decision-making, the nonprofit medical practice and research group at the Mayo Clinic has developed a ‘Decision Aid’ model to enhance participatory experiences for patients and improve medication adherence and healthcare outcomes. According to Continuum, “The Mayo Clinic developed a philosophy around the use of decision aids for clinicians to have patient-centered conversations surrounding medication options and lifestyle changes. These aids help turn the decision-making process into a partnership between the clinician and patient, recognizing that each participant brings specific expertise. While the physician understands the facts and figures, the patient knows what can work in his or her life.” Continuum reports that Mayo’s randomized trials where the ‘Decision Aid’ was used resulted in improved trust and enhanced knowledge, with one study even showing improved drug adherence. In short, involved patients become empowered patients who collaborate with their care, and ultimately, it is hoped, live healthier over the long-term.

The Future of Healthcare

Healthcare has a lot of predecessors from which it can learn. Both the financial and high-tech industries have both cautionary tales and exploding opportunities that have paved the way to today’s consumer marketplace.  Silicon Valley is at the forefront of technological advances because the high-tech industry functions primarily as a breeding ground for fostering innovation. Without large amounts of regulation and red-tape, many high-tech companies open-source their technology, so that others can build in new functionality into underlying platforms. As a result, consumers get to experience new apps at a relatively rapid pace. Silicon Valley is a place where consumer demand meets technological innovation. In this highly competitive, fast-paced environment, companies either step up or step aside. According to The Healthcare Blog, “The history of Silicon Valley over the past decade offers something of a roadmap for health care in this department. Netflix, Google, Amazon and Apple are all unrecognizable from where they began. They listened to their customers, opened up to innovation, and built delightful experiences that have made them essential to nearly everyone who uses them.”

Some of the high-tech cautionary tales include Netflix outpacing Blockbuster in the movie game, and Apple burying Kodak in the consumer photo arena. Interestingly, both Blockbuster and Kodak at first didn’t see the competitors coming, and when they finally did, both companies seemingly adopted the “too big to fail” mantra and did very little to catch up. By the time they did, it was too late; both were outpaced by upstart, flexible, consumer-focused companies who saw the opportunity to remake the landscape and gain new devotees to their burgeoning brands. What healthcare organizations will rise to the challenge and which will fail? According to Ed Park at Athena Health, waiting for legislation to lead the way is a surefire way to fail, “We believe that others across the continuum of care need to open up their systems, too.  But legislation and mandated standards won’t be the way to do it. In health care, as in Silicon Valley, we need to allow market forces and our customers to evolve health care into the open experience we need and want.”

Tell us your thoughts about the evolving healthcare marketplace and empowered consumer. Use #healthcaretomorrow to join the conversation.